Puducherry Assembly Election 2021: Polling in 30 constituencies to be held tomorrow 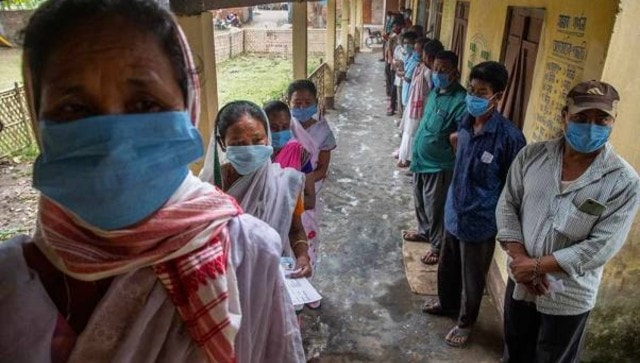 Electors queue up to vote. PTI

The Puducherry Legislative Assembly elections 2021 in four districts consisting of 30 Assembly constituency will be held in a single phase tomorrow (6 April, Tuesday).

Puducherry and its outlying regions of Karaikal, Mahe and Yanam go to Assembly polls on Tuesday in a single phase. There are 30 Assembly segments, including five reserved constituencies.

In 2016 as well, the Puducherry Assembly elections took place on a single day, 16 May. This year, Puducherry polling will be carried under the strict COVID-19

The election is a keen contest between the Congress-led Secular Democratic alliance and the All India NR Congress (AINRC) led NDA.

The AINRC is seeking election from 16 seats after sharing the remaining 14 seats with BJP (nine) and AIADMK (four). Similarly, the Congress is contesting in 14 seats and supporting an Independent in Yanam while its allies the DMK is seeking election from 13 seats. VCK and CPI constituents of the alliance led by Congress are wooing voters in Oulgaret and Thattanchavady constituencies respectively.

The counting of votes will be done on 2 May.

In the single-phase Assembly polls in Puducherry, voting is likely to begin at 8 am and end at 6 pm.

Election to be held amid tight security

In the Union Territory of Puducherry 289 male and 35 women candidates are contesting in tomorrow’s Assembly election. AIR reports as many as 10,04,507 voters will decide the electoral fortune of the 324 candidates in the fray.

While talking to the media persons regarding the election arrangements the chief electoral officer Surbir Singh said that 1,558 polling stations have been set up in 635 locations in the Union Territory. One all-women polling station will be set up in each Assembly constituency.

All polling stations have been provided with assured minimum facilities, wheelchairs and transport facilities. Brailey ballot papers will also be available with the presiding officers he said. Singh further added that considering the COVID-19

pandemic threat, all the polling stations will be sanitized. Voters should have to wear a face mask.

Thermal scanners, hand sanitisers and hand gloves will be available and the voters should maintain social distancing in the polling station. There are 1,558 control units 1,677 ballot units and 1558 VVPATs that will be used during this election.

Security has also beefed up in the UT with 6,835 polling personnel, 4,811 security personnel along 40 companies of CRPF being deployed.

The chief contestants are AINRC founder leader N Rangasamy seeking election from Thattanchavady in Puducherry and the lone seat in Yanam an enclave of Puducherry in Andhra Pradesh.

He has no strong adversary in the hustings in Yanam, poll observers said. The PCC president A V Subramanian is seeking election from his home town of Karaikal (north).

The AIADMK convenors A Anbalagan and Om Sakthi Segar are testing their luck in Uppalam and Orleanpet segments respectively. Anbalagan has been holding the Uppalam constituency consecutively since 2001.

Om Sakthi Segar who was elected to the Assembly on two occasions in the past from Nellithope has now moved to Orleanth which is new turf for him.

Shahjahan had been contesting from the Kalapet segment all along but now he is fielded by the Congress in Kamaraj Nagar and he is pitted against the BJP candidate A John Kumar.

The election witnesses John Kumar and his son Richards fighting the poll on the BJP ticket. Richards is contesting from the Nellithope constituency.

Narayanasamy who headed the Congress government here since 2016 has now opted out of the poll battle. The Congress has re-fielded its woman nominee Vijayaveny in Nettapakkam and similarly, the AINRC has re-fielded B Kobika and Chandrapriyanka in Thirubhuvai (reserved) and Neduncadu (reserved) constituencies respectively.

Yanam is a star constituency as the AINRC leader Rangasamy is contesting there.

It is expected that Yanam would register the highest percentage of polling because of the hard work Malladi Krishna Rao, who had been holding the seat since 1996 is not however contesting now.

Malladi Krishna Rao was Health Minister in the last ministry. He, however, quit the post of the MLA and the Minister intensifying the crisis for the Congress rule. Anbalagan of AIADMK and his brother A Baskar (also belonging to AIADMK) are seeking re-election from the Uppalam and Mudaliarpet constituencies respectively. Anbalagan is facing the challenge from the DMK nominee Annibal Kennedy, a former legislator.

Baskar is locking horns with an advocate L Sampath (DMK) a greenhorn in poll battle in Mudaliarpet. Mannadipet is another important segment as the previous PWD Minister A Namassivayam is contesting on BJP ticket. This is new turf for him as he had all along been getting elected from Villianoor his home town. He has been on extensive electioneering in Mannadipet.

With inputs from PTI